The stimulation of economic growth

With the success and expansion of the first Industrial Revolution, it greatly affected the economy. Although this was the time of huge advancement in technology and machinery, this also affected the way how people carried out their every day lives. Whether it was the contribution of the telegraph, or how mass production aid the economy, American culture was changed by the Industrial Revolution.

The telegraph was one of the most important development to contribute to the economy. Until the invention of the the telegraph, news and information could not be shipped any faster than the fastest transportation system (Olson, 256). It was not possible for companies to expand without a communication method. An efficient form of communication was necessary (Olson, 256). The use of Morse code was the first successful long distance transmission invention, by traveling through electric wires (Foner, 324). This helped communication between companies and the success to their expansion (Morris, 173). The telegraph was first used for papers, business, and postal services rather than at home (Olson, 257). With a communication method, it became a lot easier and faster for companies to synchronized their operations and ship their products around the country (Morris, 175). The telegraph also helped with keeping the economy balanced, there was uniformity in companies and their prices (Morris, 174). Companies were able to make sure that their prices were in the appropriate range with their competitors and to also have a stable profit as well (Morris, 175). 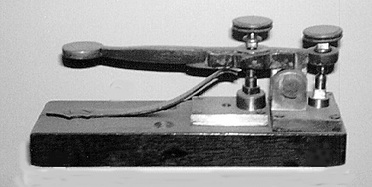 The morse telegraph key called the 'Lever Correspondent.' Created by Samuel F. B. Morse in 1844
The Industrial Revolution reduced the time required to make things, which in turn, fueled mass production. Factories that had produced goods at dozens to hundreds a day are now producing thousands or even tens of thousands (Olson, 16). With mass production, materials and things became a lot more affordable and plenty for consumers (Wyatt, 82). A lot of people are working at this point and have a stable income, letting them spend a lot more on consumer goods. This helped raise the standard of living for Americans and allowed for more consumer spending, aiding the economy (Wyatt, 82). Before, it was a lot more difficult to boost the economy, there were all local shops ran by small families (Olson, 16). For the most part, a majority of Americans were shut out of the market (DeBow, 554). This created a rise for the national market, which leads to more opportunities for successful entrepreneurship (Olson, 15). Entrepreneurs started looking in new technologies to make work more efficient and making new business opportunities to sell products everywhere for people (Olson, 15). This greatly changed the people and the economy as population rises around big business and depopulation happened to the country side, giving rise to the government (Olson, 17). Only ten percent of the population lived in urban areas,while the rest lived in cities that revolved around merchant business, sea trade, simple handcrafts, or service activities (Wyatt, 88).The only problem with this economy boost is that the local business started to suffer. Large companies were able to offer the same products as local business for a much more affordable cost. Eventually either driving these small shops out of business or combining them (Olson, 17).

Although the rise of the Industrial Revolution aided the economy, it also resulted in a shift of the economy as well. The Panic of 1867 caused an outbreak in the United States, the economy collapsed (Cornog, 87). It was a financial crisis where profits, wages, and prices went down while unemployment rates went up. The government was using paper money to purchase land and not considering the amount of gold and silver they had in the banks (Cornog, 88). President Andrew Jackson decided to changed it so that public lands could only be purchased in gold and silver, and at the same time, England became suspicious of America and only accepted their payments in gold and silver as well (Foner, 390). With both drastic changes happening the same time to the economy, it lead to the United States being stuck in a seven year depression (Cornog, 92). The economy quickly spiraled down with millions of dollars in bank notes. Businesses started failing, and with people losing their jobs, many were not ale to pay their mortgages any longer (Foner, 391). Everyone became either poor or without a job and could not afford to buy goods, therefore not being able to aid the economy. The economy of the United States was put on hold. It was not until the 1840's when the economy was slowly able to rebuild itself again (Cornog, 96).

The first Industrial Revolution showed the rise and fall in the United State’s economy. The advancements with the telegraph helped business expand and succeed. It was a time when many Americans were getting stable income for the first time and were able to buy goods they wanted. With the help of factories with their mass productions, goods became very affordable for Americans. By the time the Panic of 1837 occurred, the government went broke. Americans soon realized that the economy was struggling once again, and that everything they had worked hard for had disappeared. Americans were once again put into a struggle and had to rebuild the economy again.

DeBow, James Dunwoody Brownson. Importance of an Industrial Revolution in the South. DeBow's Speech of the Southern and Western States. Devoted to Commerce, Agriculture, Manufactures (1850-1852) May 1852 1852: 554. Print.