﻿  During the first Industrial Revolution, many social standards of the community were starting to change. Since there were new spinning and weaving machines available, the textile mill factories were built to increase their profit. The people who established these mills hired children and women to decrease their labor cost by paying them low wages and having poor working conditions for them as well. The Labor force impacted American culture through various means such as the child labor conditions, women in the factories, and the immigrants working in the factories.
﻿ 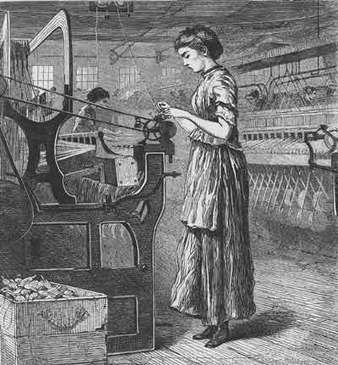 Illustration of an 1840s Lowell Mill Girl
﻿ The labor conditions that children faced were very demanding for a human being from such a small age. For example “In the Manayunk district of Philadelphia, children as young as seven assisted in spinning and weaving of cotton and woolen goods” (Wolensky 2). The children working in the factories had their childhood freedom taken away from them. “In 1830 in a sample of 43 Manchester mills, 22.3% of the workforce was under 14 and 32.4% under 16” (Cunningham 412). This means that about 50% of the workforce in the mills were made up of children under the age of 16 and in today in the United States, a person cannot work until the age of 16. “And it is a hard thing for small children to be confined in a tight close room all day long. It affects their growth, makes them pale and sickly” (Nason).  The time these children spent in the factories prevented them from spending time with their neighbors, friends, and family. The fact that young children had to work in these textile mills, created changes to American culture on how childhood years are supposed to be spent.

Being part of the workforce was something new for the American Women, since they were expected to only stay at home to care for their children. The Industrial revolution shifted the roles of men and women by moving their main focus from farmland labor to factory labor (Davis 402). Since women were used to working at home, they experienced a great difference since they had to start arriving to work at a certain time. “Francis C. Lowell in 1826, introduced one of the most innovative movements in American history” (Wyatt 102). Lowell provided girls with work, supervised housing, and regular pay for a few years. This was a dramatic change for these girls because they moved into dorms in the city, while leaving their families back home. These girls still receive low pay for long hours of work. “By the 1830s women made up approximately 80% of the textile mill work force in America” (103). Women’s involvement in the workforce proves that they could also earn an income just like men. The women working in the factories were beginning to realize that they also had an influence in the workforce and it changed their viewpoint of what they were capable of doing. ﻿
Factories brought many opportunities for people to immigrate to the United States, since the factories needed a lot of workers who would work for a low pay. “The immigrants that came were German, Irish, British, Scandinavian, and Polish workers, whom would work for even the minimum pay” (Wyatt 104). American’s had to learn to socialize with the immigrants since they now lived in their communities giving them a new perspective. “The labor force in one factory in Massachusetts changed from being just 4% immigrant labor in the mid -1820s to more than 50% two decades later” (104). This was a huge change in the number of immigrants working in the factories which meant that more of them were living the American’s communities as well. “Unlike the 17th century immigrants, the 19th century immigrants were for the most part uneducated, unskilled, desperate for work, and easily exploited” (105). Since the immigrants were willing to work long hours of minimum wage, the women and children were replaced by them (105). Therefore less children were put to work in the factories, but horrible work conditions still occurred. The immigrants in the 19th century relates to the immigrants in today’s American society because immigrants today make up most of the workforce on the fields picking up fruit for little pay because they are jobs that U.S. Citizens do not want. Factories brought change to American’s communities because it got immigrants to join the workforce in the factories.

Many aspects of the labor force during the first Industrial Revolution determined the culture of the American during the time period of the 1820s through 1840s. The Labor force affected the social interactions that occurred in American communities. The Labor force influenced Americans to realize that children should not be put to work at such a small age, women should be treated equally across the board, and that working at a factory created a sense of being on time. If the first Industrial Revolution did not occur, then working conditions for children, women, and immigrants would have never made progress for a better future of the United States hard working communities. America’s culture became what it is today because of the events that occurred in its past. ﻿